Schwab Mansion.   ALMOST everyone in New York knows the Frick Collection, at Fifth Avenue and 70th Street, and the Cooper-Hewitt Museum, at Fifth and 91st, the pair of stupendous mansions built by the steel titans Henry Clay Frick and Andrew Carnegie. But their architectural majesty was only two-thirds of a ferric triad, the last the house of Charles M. Schwab, the Carnegie protégé who became the head of United States Steel and then Bethlehem Steel. 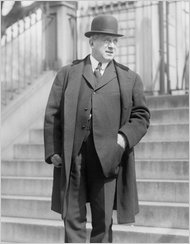 Riverside Drive with Schwab mansion in 1915.   Schwab had the most impressive site of the three, a full block overlooking the Hudson River, but it survived barely four decades.

Born in 1862, Schwab at age 18 was a stake driver for one of the Carnegie steel mills, and at 21 chief engineer. In 1897, and only 35, he became the president of the Carnegie Steel Company, a part of Andrew Carnegie’s steel empire in which Henry Frick was a partner.

Four years later, Schwab helped arrange the creation of the giant U. S. Steel Corporation. By this time Frick and Carnegie were bitter enemies, whereas Schwab remained devoted to Carnegie, whom he called the greatest steel man who ever lived.

Like Frick and Carnegie, Schwab migrated to New York from Pennsylvania, in his case in 1901. In the 1880s the common prediction was that the rich would jump from Fifth Avenue to Riverside Drive, creating a string of freestanding villas. But by the mid-1890s it became clear that the elite would continue to reside along the spine of Fifth Avenue.

Someone forgot to tell Schwab, because in 1901 he bought the block from Riverside to West End, between 73rd and 74th Streets; no one in Manhattan had yet acquired an entire block for occupancy. Schwab finished his 50,000-square-foot, 75-room house in 1905, with a gym, a bowling alley, a pool, three elevators and interiors in the styles of Henry IV, Louis XIII, Louis XV and Louis XVI.

The exterior, though, was what was singular, surrounded by a garden the size of a small park. The French architect Maurice Hébert created a chilly granite facade derived from the chateaus of Chenonceau, Azay-le-Rideau and, at the rear, Blois. On his letterhead, Hébert called himself a “Specialist for Reproduction of Historical Exteriors and Classical Interiors.”

A critic writing in The Architectural Record in 1907 considered the Schwab mansion “humdrum,” a copyist’s work that might have succeeded if the copyist had been faithful to the originals, instead of trying to improve on them. It was the apotheosis of French Renaissance architecture in New York — just as the style was going out of fashion.

Schwab, however, never expressed anything but pleasure with his American chateau, although in 1925 a real estate broker claimed that he had been asked to sell the property for $3 million; the flight from big houses to apartment buildings had been under way for a decade.

Early in 1930 The New York Times reported that Schwab was about to lease the block to developers with plans for a 30-story apartment building. But in October a census-taker found Schwab at home with his wife, Eurana, and 20 servants, mostly English-born.

Schwab was not the typical hard-bitten steel executive, and considered himself a dreamer, often saying it was pure luck that he had wound up as one of the richest men in the country. He supported, at least at first, President Franklin Delano Roosevelt’s initiatives in the area of social security and unemployment insurance, telling The Times in 1932, “Once working men were treated as machines; now they are treated like human beings.”

Both Carnegie and Frick had been dead for years in 1936, when Schwab asked New York City to buy his house as a mayoral residence, a suggestion Mayor Fiorello La Guardia flatly opposed. The Times described Schwab as “extremely anxious to sell.”

In January 1939 his wife of more than 50 years died, and two months later he moved to a hotel. He died six months after that. In 1945 The Times reported that the mansion was listed with a city clearinghouse for housing “to help relieve the shortage of apartments,” and the next year the paper called it “the white elephant on the mansion market,” with real estate taxes of $60,000 per year.

Finally, in 1948 the Schwab mansion was very publicly demolished, succeeded in 1950 by the quotidian but efficient Schwab House, an 18-story apartment building.

How is it that the houses of Carnegie and Frick have survived, while Schwab’s has vanished?

Frick had planned his house from the beginning as a museum, and had an art collection worthy of one, whereas Schwab built entirely for his own pleasure. The Carnegie house went to the Columbia University School of Social Work and then to the Cooper-Hewitt, but Schwab was trying to sell his house until the last.

There was also the ambition of Schwab’s vision. Both his colleagues put up relatively restrained houses, although larger than most others. Carnegie took over about half a block, Frick about a third, but Schwab used an entire city block, leaving more than half of it open space.

The ebullient Schwab bet everything on bringing the Loire Valley to New York, but in the end his chateau was not so much out of place on the Hudson as out of step with the city.