Circleville is a small city in Ohio with a population of 13,000. Sometime in 1976, residents started receiving personal mysterious letters about their lives. Letters were written in block letters and they could be sent to anyone. There was not a specific target group of recipients. Thousands of letters starting arriving to citizens and city officials.

“A lot of it was vindictive in tone, nasty in tone, it was sexually-oriented material or nasty accusations of – vulgar is the only way to describe them,” said Bill Harsha, former prosecutor.

One of the recipients, Mary Gillespie , received a letter that was accusing her for having an extra-martial affair with a school official. Mary was working as a school bus driver at the time. At first,Mary decided to hide the letters from her husband to not  upset him. She received more in the days following and each more threatening than the other:
“I know where you live. I’ve been observing your house and know you have children. This is no joke. Please take it serious.”

After a while Ron Gilispie, Mary’s husband ,started receiving letters himself:
“Gillispie, you have had 2 weeks and done nothing.  Make her admit the truth and inform the school board.  If not, I will broadcast it on CBS, posters, signs, and billboards, until the truth comes out.”

Mary and Ron revealed the story to three people:Ron’s sister, her husband, Paul Freshour, and Paul’s sister. They asked for their help, because they thought they knew the person behind the letters. They started sending him letters asking what he wanted from the couple.

“We thought we’d scare the guy. We sent him four or five letters only. There was no violence in them or anything, just that we knew who he was and what he was doing, and we sent him the letters.” , Paul Freshour said.

On August 19, 1977 ,  Ron Gillispie received a phone call that seemed to ensure their suspicions.  In anger, he took his gun and walked out of his house to find the person behind the letters. 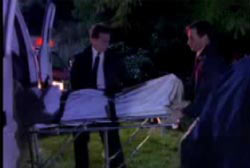 Ron was found dead near his house later that day.

Ron got killed after his car was driven off the road and crashed. Later, they discovered that Ron’s gun had been fired once. His death was a result of the crash and it is unclear why he fired the gun or if his death was an accident or murder. Most though believed, that Ron was actually the victim of the so called Circleville’s writer.

“The sheriff agreed with me that there was foul play. And then, when I contacted him again, he’d changed his attitude completely. Then, he was telling me that it wasn’t foul play, that the suspect had passed a polygraph test.” , Paul Freshour explains.

After all these events, Mary and the school official admitted their affair, but claimed that it started after the letters. Mary kept her job on the school as a bus driver. Later, while driving her bus, Mary saw signs along her route harassing her.Mary stopped her bus to rip down a sign, but noticed there was a sting attached to the sign which connected to a box located behind the sign. She took it in the bus  and discovered a booby-trap meant to fire a gun at her.

Police picked up the gun for examination. The serial number was scratched in an attempt to hide the owner,but after laboratory tests, the number of the gun was extracted and a new twist was added in this already weird case.The gun belonged to her former brother-in-law Paul Freshour: Paul refused any connection to the letters or attempting to kill Mary. However, after a jury trial, Freshour was sentenced to 7 to 25 years in prison for the attempted murder of Mary.

It was then where everyone believed that the letters will stop, since everyone believed that Circleville Writer was caught. But that did not happen. People started receiving letters again.  Sheriff Radcliff’s complaints about the letters made the warden had Paul placed in solitary confinement. The letters were sent no matter what they did to Paul in prison. All of them were postmarked Columbus, even though Paul was imprisoned across the state in Lima. The police concluded, that there was no way Paul could send them.

When Paul became eligible on parole, his request was rejected Circleville Writer seemed to enjoyed this since,Paul himself received a letter while in prison, which among other it was saying:
“Now when are you going to believe you aren’t going to get out of there?  I told you 2 years ago. When we set ’em up, they stay set up.  Don’t you listen at all?”

Some years later the letters stopped. They were sent from 1976 to late 90s
Until today, no one was ever able to find out who was behind these letters and if Ron’s death was a murder…