A man’s face was smeared with blood, as were his hands. His clothes were drenched a deep crimson. “Do you need medical attention?” The police officers asked him. “No.” The man answered quietly. “The blood is not mine.”

Earlier that night, 41-year old Brian Bellamy smashed a hammer through a window of his estranged wife’s parents home and headed up the stairs possessed with rage. Bellamy’s two year-old son was sleeping next to his wife, but that did not deter him from his evil and dastardly deed. Bellamy started bludgeoning his wife with the hammer. Hard, violent blows to her face and neck. Blood splattered everywhere, dripping from the bed and onto the floor. Next Bellamy took his hands and wrapped them around her small neck and began the squeeze.

When the victim’s father tried to stop him, Bellamy started to strangle his father-in-law as well. That’s when the Bridgewater police arrived, just in time. The victim’s mother had called 911 at the beginning of the crime. Luckily, the woman survived.

This was certainly not the first bludgeoning or crime of passion involving an attack on a family member in Bridgewater, a town that has a dark history of madness and murder. Behind the veils of this beautiful college town, lies a sinister and mysterious history of brutal matricides and parricides, spousal arguments that lead to murder and then suicide. The patterns of violent domestic disputes goes on to this very day, according the Bridgewater Police Twitter page. It is not hard to notice the patterns of high call volume in responses to domestic disturbances among family members. 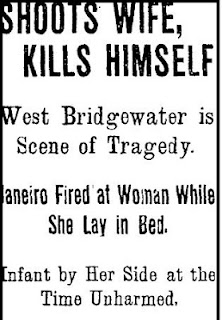 At 4 a.m. on August 22 in West Bridgewater, Marianio Janeiro entered the bedroom  where his wife lay in bed, her tiny infant child asleep next to her. Marianio  had just bathed, shaved and  dressed in his finest clothes.

The poor woman was  probably wondering where her husband was going, all dressed up at 4 o’clock in the morning. But if she was going to ask him where he was off to,  she never had the chance to ask him.

“This is the last of you and me; We have got to die,” Marianio said to his wife. Then he took a revolver and shot her in the head. “The bullet entered her head back of the left ear and left an ugly wound. After shooting his wife he held the pistol to his head and fired the second shot just above the right ear and fell dead instantly.”

The baby was unharmed. Although she did sustain critical injured,  Mrs. Janeiro survived the attempted to murder to the best of this writer’s knowledge.

THE MURDER OF THE STURTEVANTS, 1874 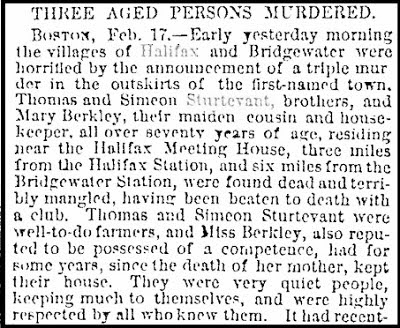 Seven miles from the Bridgewater Depot in nearby Halifax, “during the peaceful quiet of a Sabbath evening, one of the foulest and most unnatural murders that ever stained the criminal actual. of any locality, had been perpetrated. Three aged persons, the inmates of the same home, whose lives had been passed in plodding industry, and whose history was as uneventful as human experience can be, were suddenly involved in as dark a tragedy as the mind of man can conceive, and in the midst of it hurried out of existence.” 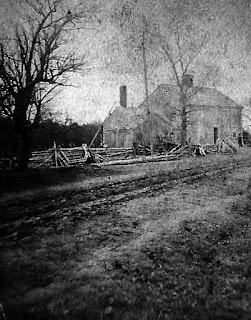 On February 15, 1874, three elderly people were brutally beaten to death with a sharp cart spike. A neighbor found what was left of them the following day. The crime scene had the even the toughest police officer shaken. “The three aged occupants of that house were found cruelly murdered, their heads pounded, to a jelly. Thomas and Simeon, the two brothers, within the house that should have sheltered them, and Miss Mary Buckley, the housekeeper, outside, though almost within its very shadow.” The triple murder of two brothers and their housekeeper had locals of the Bridgewater area living in terror–until police arrested the crazed murder, William E. Sturtevant, the very nephew of the victims.

William was murder suspect number one and confessed because of a parrot. (Yes, a parrot.) Mary Buckley had a pet parrot named Captain Kidd. When police brought William to the crime scene, Captain Kidd shrieked “Murderer, Murderer!” and then made the sound of death rattle. The parroting the likely last words of Mary Buckley was simply too much for William, who caved and confessed right there.

The house where the murder took place is rumored to be haunted. Not far from the house is the cemetery where Simeon and Thomas Sturtevant are buried. Their gravestones read “MURDERED” across them. The murderer, William Sturtevant was buried in the same cemetery in a secret burial conducted under the cloak of night after he was executed by hanging for his dark deeds to his two elderly uncles and his cousin, their housekeeper. 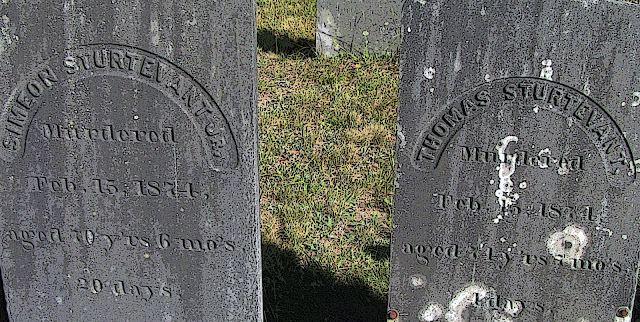 In the 1980s, a local newspaper ran a story about the grisly history of the Sturtevant House. The reporter interviewed the current occupant, a Bridgewater State College professor at the time. Although the man claimed not be a man of “superstition” and refused to accept the local stories that the house was haunted, he finally found himself succumb to the fact that something was indeed in the house. “The house has a powerful presence….the house makes noises. Footsteps, breaking, heavy breathing. I never see anything, but I think that someone is there.” 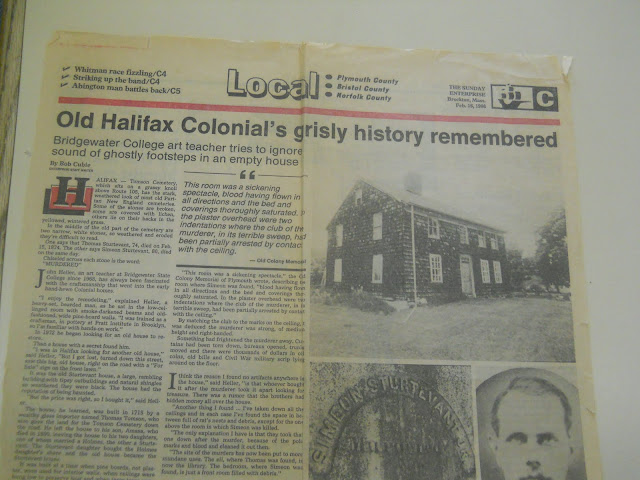 “Several times we have had people over and when they got up to leave, the door swung open. The door to the upstairs attic kept coming unlatched and banging. I kept closing it, but it kept opening, even though there was no wind.” 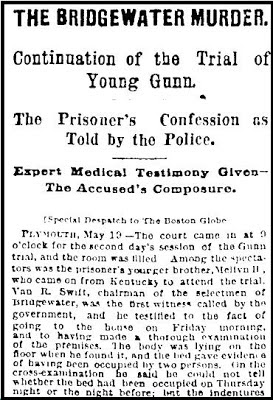 A fight over potatoes on September 24th, led to the bloody massacre of Henry Gunn, at the hands of his own son Justin, who attacked his father with both a screwdriver and  hatchet. The Boston papers reported that the victims “brains were dashed while he slept” with “two hideous wounds to the head.” Justin Gunn was not remorseful for the crime at all when apprehended by Bridgewater police a few weeks after the crime. In Gunn’s confession to the police, Justin was oddly calm and in complete control when he described the horrific events that occurred on September 24, 1879. After his father scolded him over his son’s error in putting wet potatoes in the root cellar, Justin Gunn claimed that his father “knocked him down.” Gunn went on to say in his confession: “I got up, reached to the mantle piece and took a small screwdriver about the size of my finger, but about two feet long and struck him with it but he got the best of me and pounded me good. I was wild for revenge. As he rested on the edge of the bed, I went out of the dining room into the passage way and took a hatchet which I had found there and came back to the room where he was. Holding the hatchet–a heavy one–in my left hand…I went to the front of father and when I got past I turned and struck him the head with it, using both hands and knocking him so that his head fell toward the head of the bed on which he was sitting. I struck him three or four times. He fell off of the bed. I picked him and and laid him on it again, he made not noise at all.”

One of the most recent murder within a family in the Bridgewaters  occurred on December 15, 2002, when George Nardi, living with his mother, Deborah Buchard on Goodwin Street in East Bridgewater, killed her in a fit of rage when she refused to make him dinner that night. The murder weapon were Nardi’s bare hands with which he smothered her to death. Immediately after the crime, Nardi left a chilling voice mail for his brother. It was of Nardi laughing insanely, then finally saying, “You’re not going to be able to spend Christmas with mom this year.” Norman Bates-style, Nardi lived with the rotting corpse of his mother for over two weeks. Prosecutors reported that Buchard’s “bloody corpse was found Monday covered with an afghan in the bedroom of their apartment.”

[H/T Beyond The Bridgewater Triangle]