Jack the Ripper: The “From Hell” Letter

Jack the Ripper: The “From Hell” Letter

Jack the Ripper may not have existed in the way we’ve always believed, with yet another investigation claiming to reveal who the true Ripper was:

“New documents seem to disprove the theory that the victims had their organs cut out by their killer, a key aspect of the murders that had steered previous investigations toward suspects with medical knowledge, reported the BBC. Gaps of time between the murders suggested to Marriott that the killer might have been a traveler, and sailors were known to seek out prostitutes in the Whitechapel district.

Perhaps most compelling was the fact that [Carl] Feigenbaum’s own lawyer, William Lawton, had once told reporters he believed his client had confessed to the crimes by claiming a disease made him kill and mutilate women. Indeed, Feigenbaum was eventually convicted and executed for an unrelated murder in New York City in 1894…” – Jack The Ripper Mystery Solved? Cold Case Investigation Implicates German Sailor Carl Feigenbaum

Of course, there have been so many theories and attempts to unravel the mystery of old Jack, I think it’s unlikely we’ll ever know the truth. What is true? In 1888, the bodies of five women were found mutilated in the Whitechapel district of London between the months of August and November. 125 years on, and the murders remain unsolved.

The “From Hell” Letter

One of the more haunting chapters of the Jack the Ripper story, I think, involves a letter that was postmarked on October 15, 1888.

Addressed to George Lusk, head of the Whitechapel Vigilance Committee, the letter arrived wrapped in brown paper and inside a small box, accompanied by half a human kidney, preserved in ethanol. The contents of the letter were as follows: 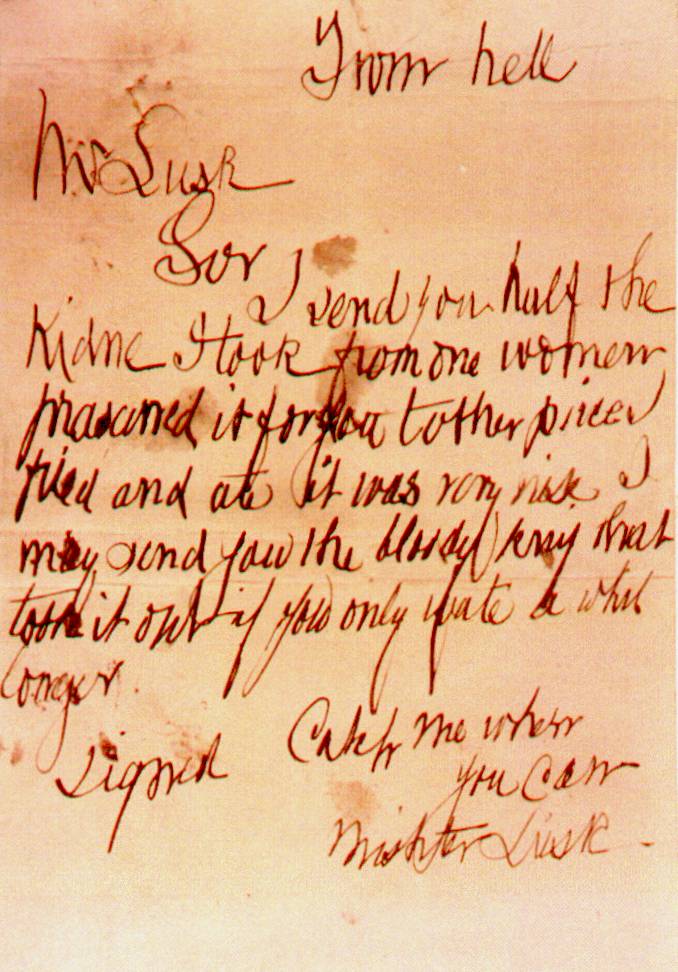 Mr Lusk
Sor
I send you half the
Kidne I took from one women
prasarved it for you tother piece
I fried and ate it was very nise. I
may send you the bloody knif that
took it out if you only wate a whil
longer.

signed
Catch me when
you Can
Mishter Lusk.

Lusk himself believed the letter was a hoax; the kidney could have been acquired by medical students or in some other manner. Perhaps it was merely coincidence, then, that one of the Ripper’s victims, Catherine Eddowes, had been discovered with one of her kidneys removed.

Other letters and postcards were sent by someone claiming to be Jack, as well. Some believe the “Dear Boss” and “From Hell” letters, as well as the Saucy Jack postcard, were authentic, but we honestly don’t know if any of them were truly written by the individual who committed the murders.

Unfortunately, many of the letters, including “From Hell,” have been lost. Only photographs remain.